A Special Valentine’s Day at the Kids Safe Zone; Kids Recognize Adults Who Love Them

Ericka Alston-Buck with the Female Trouble Podcast: Growing Up in Baltimore and Founding the Kids Safe Zone

Kids and Police Officers Become Buddies at the Pool

Researchers Study What Helps Some Poor Kids Thrive in Baltimore

Ericka Alston-Buck Interviewed About the State of Baltimore

State Support Flows in for Baltimore

Penn North Staff Proud to Be Creating Change in Baltimore!

State of Baltimore: Women Step Up to Help At Risk Kids

Children in US Cities Feeling the Rise in Violence

The War Room, The Street: 2 Responses to Baltimore Violence

As Trial Approaches, What Has Changed Since Freddie Gray's Killing?

Kids Safe Zone Gets Kids Ready for Back to School

Nonproft Near Torched CVS Gets Van to Help Its Clients

You've Heard What's Wrong in Freddie Gray's Neighborhood. Here's One Local's Vision for Turning That Around

Back to "Normal" in Baltimore- But What's "Normal"?

Why Couldn't $130 Million Tranform One of Baltimore's Poorest Places?

Penn North Residents Weigh in on Recovery, Both Theirs and the City's

A City Divided: I'll Pray for Peace, But I Won't Pray for Baltimore

Baltimore Gangs Agree to Truce Similiar to One During 1992 Riots in L.A.

School Was Closed, But This Baltimore Dad Had An Amazing Lesson For His Son

Martin O'Malley Takes a Walking Tour of an Angry Baltimore 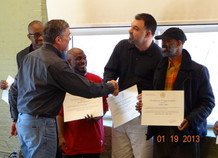 January 19, 2013-Executive Director, Blaize Connelly-Duggan, is recognized by the White House Office of Drug Control Policy on the National Day of Service.

Needles of Hope - A Short Documentary Film by Ronis Productions